As climate change advances, the U.S. is experiencing more drought, more wildfires, more floods. And now it is hurricane season – one year after we witnessed a total of 30 named storms, a record.

But the federal agency charged with providing emergency aid and rebuilding assistance to Americans with damaged homes is facing a storm of its own. In recent months, a number of studies have confirmed what housing advocates have known all along: The Federal Emergency Management Agency (FEMA) distributes more aid – a lot more, in some cases – to white homeowners than it does to Black homeowners. And much more aid goes to affluent neighborhoods than poor ones – even though an argument can plainly be made that poor neighborhoods need it more.

Last week, the New York Times published an investigative piece that summed up many of the studies.

The Times told the stories of Roy Vaussine and Charlotte Biagas, who live in modest, single-story homes about a dozen miles apart in southwest Louisiana. When Hurricane Laura made landfall last August, the damage to their homes was nearly identical. A tree crashed through the roof of each house. Neither homeowner had insurance that covered the damage, and each sought assistance from FEMA. 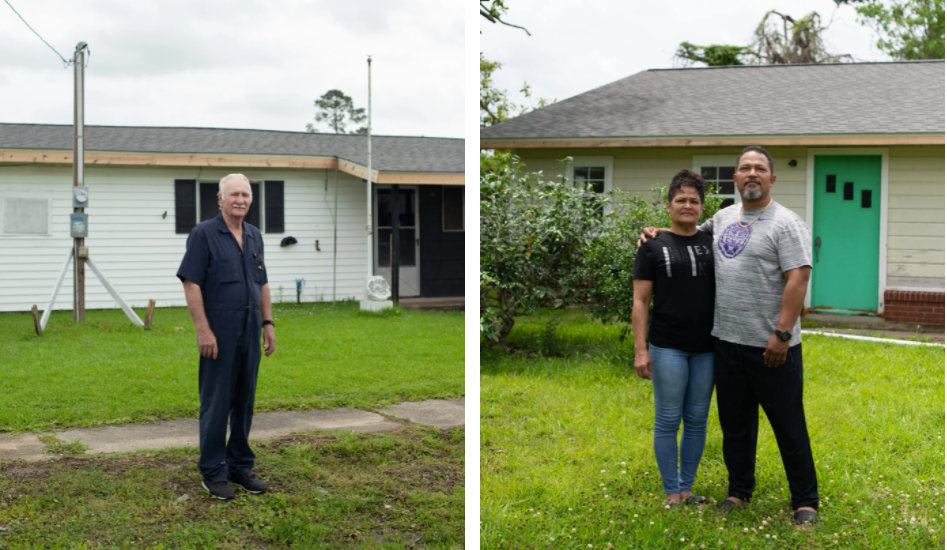 “A growing body of research shows that FEMA, the government agency responsible for helping Americans recover from disasters, often helps white disaster victims more than people of color, even when the amount of damage is the same,” the Times wrote. “Not only do individual white Americans often receive more aid from FEMA; so do the communities in which they live, according to several recent studies based on federal data.” When property values are higher, FEMA’s payments for damages are higher, making it far more difficult for residents of low-income communities to rebuild. The dividing line of income across communities is also very often a dividing line by race or ethnicity.

This report brought to mind the experience of Puerto Rico after hurricanes, in which homeowners got little or no relief because of low property values and informal proof of ownership common there, and few long-term community rebuilding projects were approved compared to disaster-struck communities on the mainland.

Crishelle Palay, Executive Director of the Houston Organizing Movement for Equity (HOME) Coalition, recently penned an op-ed for the Houston Chronicle in which she discussed FEMA’s response to the ice storm that crippled Texas this past February. In her piece, she noted long-time policies that actually widened the income gap between whites and Blacks.

Palay wrote that since 2015, Houston has experienced eight federally declared major disasters. When this year’s winter storms hit, many Houstonians, and especially those who live in low-income communities of color, were still awaiting repairs from 2017’s Hurricane Harvey.

“For low-income Black and Latino communities, even a medium-sized storm can spell disaster on top of the ongoing burden of structural racial inequality,” Palay wrote. “A study by Rice University and University of Pittsburgh found that between 1999 and 2013, natural disasters increased Houston’s racial wealth gap by $87,000.”

Advocates such as the National Low Income Housing Coalition have been tracking this issue for years, particularly as it affects low-income renters. Low-income renters are particularly vulnerable to natural disasters as the price of housing tends to rise after a disaster occurs, in part because of a decrease in available housing stock and in part because landlords need or want to recoup repair costs through higher rents. “For example, in the wake of a disaster, FEMA can and should enter into an interagency agreement with HUD to activate the Disaster Housing Assistance Program (DHAP) to provide direct, longer-term rental assistance to affected households,” Threet wrote. “Low-income renters are not well positioned to pay higher rents for scarce available rental homes, and they need assistance for longer periods of time than FEMA’s temporary housing programs provide. In addition to DHAP, the disaster housing recovery process generally needs to be rethought from the ground up, to prioritize the needs of the least well-off.”

The Times reports that leaders at FEMA are trying to get a handle on the causes of racial disparities and what can be done about them. “The problem seems to stem from complex systemic factors, like a real estate market that often places higher values on properties in communities with many white residents, or the difficulty of navigating the federal bureaucracy, which tends to favor people and communities that have more resources from the beginning,” the newspaper writes.

And the pressure is growing.

During her Senate confirmation, the first question faced by Deanne Criswell, President Biden’s choice to run FEMA, was how she would ensure communities of color get equal access to disaster aid.

“It is unacceptable that minority communities not only feel the impact of natural disasters far more severely than others, but they also often have more difficulty obtaining assistance from the federal government,” Senator Gary Peters, Democrat of Michigan and chairman of the Homeland Security and Governmental Affairs Committee, said in a statement.

Palay, the Executive Director of Houston’s HOME Coalition, says she would start by requiring FEMA to prioritize low-income communities for access to its recovery programs.

“Houstonians at all income levels know how complicated and frustrating it can be to navigate multiple federal programs from agencies like FEMA, but the barriers are even more daunting for lower-income survivors,” Palay writes. “Already, the communities we work with in the HOME Coalition are reporting that they are being summarily denied by FEMA. Without access to the internet, even applying to the program is difficult, especially for people who do not speak English. These barriers to entry on the front end will extend the pain of this recovery if they are not addressed.”