“Arbitrary and Capricious:” How – and Why – Courts are Defending Human Needs Programs Against Trump’s Relentless Attacks

It has happened more than a dozen times, and that could be a quite conservative estimate: in federal courthouse after federal courthouse, in all regions of the country, judges have ruled the Trump Administration’s actions to be “arbitrary and capricious.”

At Voices for Human Needs, we wondered: why do those words keep coming up? What is the Trump Administration’s track record in the courtroom? And what does this mean for advocates of a human needs agenda?

We should begin with a brief discussion of the Administrative Procedure Act (APA). The APA is a federal statute that was enacted in 1946 as means of governing the many federal agencies that had been created under President Roosevelt’s “New Deal” (as well as many that were already in existence).

The APA governs the way in which administrative agencies of the federal government may propose and establish regulations, and grants federal courts oversight over all agency actions. It has been called the “constitution” for U.S. administrative law. So, then, we have a legal roadmap of sorts: If the Trump Administration pursues an executive branch policy on a whim, without mandated public input, in variance of known policy, contrary to congressional intent or in actual violation of existing law, its actions can be subject to the “arbitrary and capricious” standard of the APA.

But how often has this happened?

Some context: two-thirds of the cases filed against the Trump Administration allege APA violations. Presidential administrations often are challenged in federal court on APA-related issues and, the Post notes, on average 70 percent of the time they win. But with the Trump Administration, as of January, the win rate was around 6 percent – a shocking record that underscores the Administration’s flagrant disregard of the law and gross incompetence.

We were curious as to why the Administration keeps losing.

We examined a database of 58 federal rulings maintained by the Institute for Policy Integrity at New York University’s School of Law. This database is not an exhaustive record of all the times the Administration has been sued because it consolidates overlapping cases. For example, in the past week, there have been five U.S. District Court rulings striking down the Administration’s Public Charge proposal; the institute’s database counts all five rulings as one case.

Of the 58 rulings, the Administration prevailed in five cases and lost in 53. Most of the cases involved the APA. A Voices for Human Needs examination found three common reasons for the Administration’s losses:

William W. Buzbee is an expert on administrative law who teaches at Georgetown Law School. He has studied the Administration’s record in the courts. “What they have consistently been doing is short-circuiting the process,” he told the Post. In the regulatory cases, Buzbee said, “they don’t even come close” to explaining their actions, “making it very easy for the courts to reject them because they’re not doing their homework.”

Buzbee’s words were reinforced by some of the judge’s rulings striking down the Administration’s policies. Earlier this year, the Administration attempted to end some $200 million in grants to 81 programs preventing teen pregnancy. But U.S. District Judge Ketanji Brown Jackson halted the move. 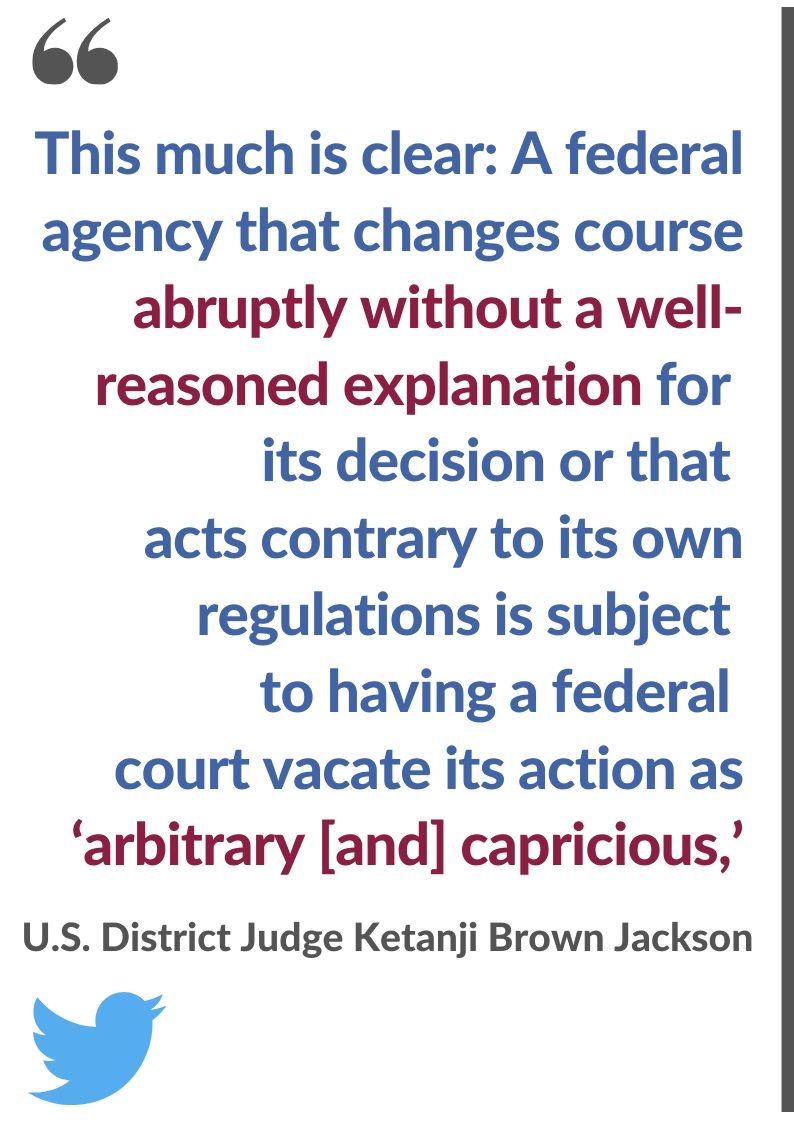 So what does all this mean for the many human needs programs that CHN and CHN member groups advocate for? A lot, actually. A number of the Administration’s attacks have been blocked in areas such as Medicaid, the Affordable Care Act, immigration, and more.

Within the past week, five federal judges – in California, Illinois, Maryland, New York and Washington State – struck down the Administration’s “Public Charge” proposal, which would have denied green cards or visas to immigrants if they have used certain aid programs such as Medicaid, SNAP or housing assistance. At least three of the five judges used the words “arbitrary and capricious” in their rulings.

In what might have been the most-noted use of the words “arbitrary and capricious” of the entire year, Supreme Court Justice John Roberts used the phrase, in part, in a majority opinion he authored that prevented the Administration from including a citizenship question on the 2020 Census.

A federal judge in Washington, D.C struck down the Administration’s efforts to fast-track deportations after finding that the Department of Homeland Security had violated notice-and-comment requirements and arbitrarily ignored the rule’s “potential negative impacts.”

A federal judge in California prevented the Administration from categorically denying asylum to those entering the U.S. from the southern border who did not first apply for asylum in another country.

A federal judge in Washington, D.C. blocked the Administration from approving Kentucky’s proposed Medicaid work requirement plan. He wrote that the effort was arbitrary and capricious for failing to address the lost coverage that would occur under the move.

A federal judge in Washington D.C. prevented the Administration from delaying implementation of a rule increasing access to housing for low-income tenants.

A federal judge in Maryland said the Administration erred in trying to terminate a grant for teen pregnancy prevention. The judge held that the Administration’s action was arbitrary and capricious for failure to address the relevant statutory factors.

There’s more, but you get the drift. The APA, a law that many if not most Americans have never heard of, is a significant hurdle that has worked to protect many human needs programs from the Trump Administration’s relentless, frontal assault.