“Over the years, anti-poverty advocates have often been disappointed when political candidates or officials failed to mention the problem of poverty in America in speeches or debates. Last night was different. 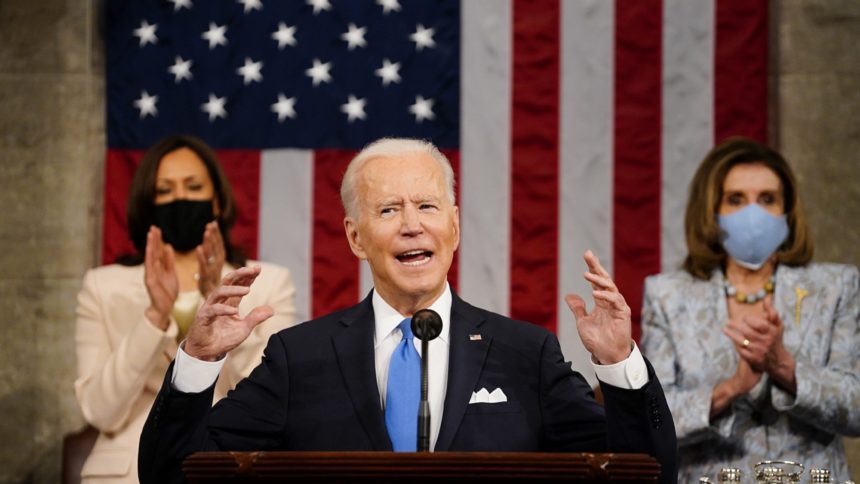 WASHINGTON, DC – APRIL 28: President Joe Biden addresses a joint session of Congress on April 28, 2021. On the eve of his 100th day in office, Biden spoke about his plan to revive America’s economy and health as it continues to recover from a devastating pandemic. (Photo by Melina Mara-Pool/Getty Images)

“President Biden, in his first address to a joint session of Congress, said ‘And, maybe most importantly, thanks to the American Rescue Plan, we are on track to cut child poverty in America in half this year.’

“The President’s American Families Plan would extend that historic achievement into 2022 and likely beyond.  According to poverty researchers at Columbia University, significant expansions of the Child Tax Credit, Earned Income Tax Credit, child care assistance, summer nutrition benefits for children, and increased Pell Grants would reduce child poverty by nearly half of projected levels if these provisions were not in place.  These investments are part of a comprehensive approach that will secure our future.

“The human service providers, faith groups, policy experts and advocates who make up the Coalition on Human Needs agree with the President that our nation is at a critical inflection point.  Millions of Americans have suffered serious losses in the pandemic.  Illness or death of loved ones, loss of work and income, the threat of eviction or utility shut-offs, and widening gaps in education could leave tens of millions behind now and for decades to come.  Instead, President Biden’s American Jobs and Families Plans together would invest to reverse the pandemic’s toll and to meet our obligations to build a better future.

“President Biden’s investment plans take aim at our most serious problems.  He would create important jobs with decent pay, in home care, child care, infrastructure building (including housing, broadband and transit), education, health care, renewable energy and environmental protection.  These jobs will provide opportunities for people with low incomes, communities of color, and rural and urban areas.  The Plans will do more to make life better for families than anything proposed by a president in the last 50 years.  The substantial increases in child care, preschool, paid family and medical leave, and increased income through the Child Tax Credit will make it possible for parents to work while meeting their families’ needs.  Increased subsidies for health insurance will ease burdens for families.  Similarly, people with disabilities and the aging will benefit greatly from increased availability of home care.  Young people, who often fall permanently behind if they start work during an economic downturn, will be helped by free community college, subsidized jobs, other employment opportunities, and the increased Earned Income Tax Credit for workers without children.

“The President pays for these urgently needed initiatives by requiring profitable corporations and rich individuals to pay their fair share.  His revenue proposals are well-targeted.  There are many other options Congress could also adopt, such as an increase in the estate tax and a financial transactions tax.  We can also save billions by limiting the cost of prescription drugs. It is clear that we can afford the investments President Biden proposes. In fact, we can build on his plans, by making the increased Child Tax Credit permanent, further increasing rental housing vouchers, expanding health coverage further, increased eligibility of immigrants for services and benefits, and improving unemployment insurance.

“Now that the President has laid out his investment plans, we look to Congress to act.  Federal actions and inactions have for far too long contributed to a growing concentration of wealth in few hands while our families are increasingly insecure and our racial divides shamefully persist.  For the sake of our shared future, Congress must act now to support and build upon the historic investments of the Biden American Jobs Plan and American Families Plan.”