A MomsRising staff with her baby at the tiny podium.

A “storm” was brewing on Tuesday on Capitol Hill for ZERO TO THREE’S third annual Strolling Thunder event.  Families from all 50 states and Washington, D.C. strolled through the halls to urge their members of Congress to #ThinkBabies and prioritize early childhood policies. Parents – with babies in tow — emphasized quality, affordable child care, time for parents to bond with their babies, healthy emotional development, and strong physical health and nutrition.

In his opening statement, Melmed said, “Each of the little ones here have enormous potential.” However, with the current policies in place, many of these young children across America are unable to reach their potential due to a variety of economic and social barriers.

Childcare costs are higher than in-state college tuition in most states. Without access to quality, affordable education, children in the wealthiest country in the world are not given the greatest chance to succeed. Cunningham, a new father as well as freshman congressman, brought attention to the burdensome choices parents must make when considering putting their baby in child care: would it be less expensive for one spouse to quit their job and stay home? Can they cut costs elsewhere to afford it? Some families even choose to delay having children solely based on child care affordability.

Atkins, a mother of a toddler, was forced to make the difficult decision to quit her job when her newborn son was diagnosed with severe asthma. Without access to paid family leave and the need to take many days off to care for her son’s needs, Atkins was unable to afford child care on her reduced salary.

Sadly, her story is not unique. America is the only developed country that does not offer a paid family leave program. Mandating paid family leave would give parents more time to bond with their children, as well as provide a safety net in case of any health emergency. 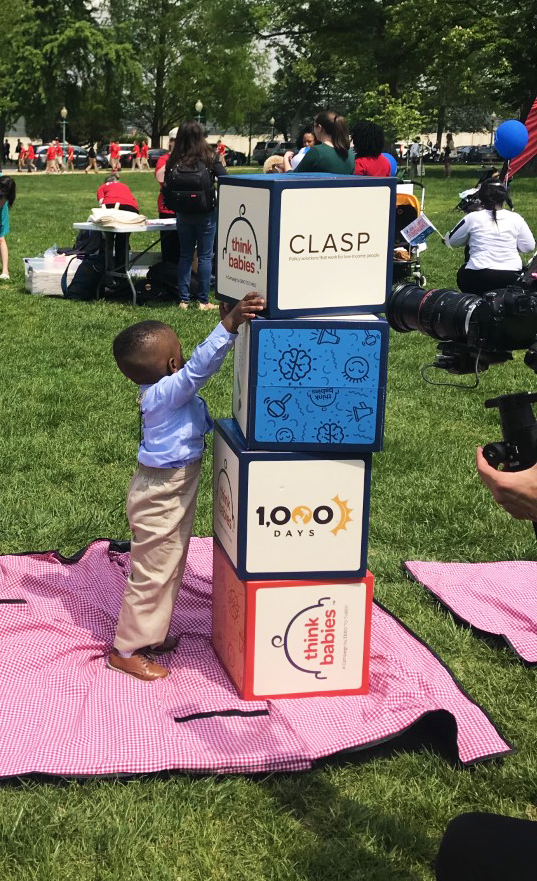 We cannot stand idly and wait for the next Congress to take action on early childhood initiatives. As Speaker Pelosi (D-CA) conveyed, America has a child care crisis, and the members of Congress at Tuesday’s event expressed urgency. They suggested strengthening and expanding the child tax credit, making investments in early childhood programs such as Head Start, increasing funding for the Child Care and Development Block Grant, and establishing a paid family leave program.

Senator Murray, a leader on children’s issues in the Senate, inspired all advocates at the rally with her powerful personal story. Before running for office, Murray worked as a citizen-lobbyist who advocated for educational issues. At one meeting with a state representative, she was told, “You can’t make a difference. You’re just a mom in tennis shoes.” She has certainly proven that a mom in tennis shoes can make the change she wishes to see. Today, she advised the parent-advocates, “When someone tells you that you can’t make a difference, it is because they are afraid you will.”

As toddlers lined up to stand behind a miniature podium in front of the Capitol Building, you could not help but think that these children are our future members of Congress, grassroots organizers, and community leaders. Advocates must raise their voices because babies and toddlers are counting on the leaders of today to invest in their futures.

ZERO TO THREE, the sponsor of Tuesday’s Strolling Thunder event, is a CHN member organization.