Resources from around the Coalition: Paid Leave, Raise the Wage, Immigration, and more

As members of the 116th Congress settle into their new roles, CHN’s member organizations continue to advocate for the policies that will lift families out of poverty, defend immigrant rights, and protect Americans’ health care.

The National Partnership for Women and Families has provided advocates with a variety of helpful fact sheets and links regarding the passage of a Paid Family and Medical Leave Act. The various fact sheets consider all individuals that will benefit from enacting this program: children, fathers, caregivers, businesses, and more.

Specifically, Paid Family Medical Leave legislation would have a positive impact on the community of individuals with disabilities. On Tuesday, Feb. 5, the ARC and the National Center for Children in Poverty (NCCP) at Columbia University released: Disability Perspectives on Paid Leave: A Qualitative Analysis of Leave-taking Among Workers Affected by Disabilities or Serious Health Conditions. Despite the fact that approximately 1 in 5 Americans have a disability, the discussion on paid family medical leave focuses primarily on time to bond with a new baby or newly adopted child. Yet, a national paid family medical leave insurance program “will not only benefit people with disabilities and their families but will also foster programs that are effective for all workers.” Since Congress last raised the federal minimum wage a decade ago, inflation has eroded the pay of America’s lowest paid workers, a loss of $13,329 over the last ten years. For perspective, a full-time worker earning $7.25 per hour  has gross pay of $15,080 annually. A variety of our member organizations have published reports, fact sheets, and sign-on letters to promote the positive impact that the Fair Wage Act would have on the low-income population.

Based on research from the Economic Policy Institute, the impact that raising the minimum wage gradually to $15 by 2024 is substantial. The average directly affected worker who works all year would receive a $4,000 increase in their annual wage income, or a raise of 20.9%. In addition to lifting families out of poverty, the $120 billion in addition wages would help stimulate the economy and “spur greater business activity and job growth.”

Within their report, the Leadership Conference on Civil and Human Rights brought attention to the groups who will benefit most from raising the minimum wage: women and minorities. In addition, LCCHR provides data showing that the current minimum wage is insufficient to meet basic needs in key cities and is not able to lift families out of poverty. 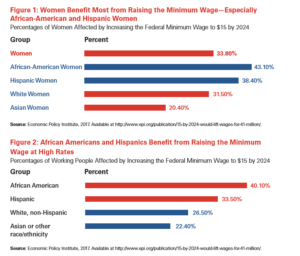 The National Women’s Law Center also mentions the favorable impact the Raise the Wage Act would have on women in particular. In a letter urging members of the 116th Congress to prioritize the minimum wage, NWLC states that the passage of this law would be a pivotal step in ensuring that women work with “equity, dignity, and safety.”

Most recently, two representatives of member organizations (Vanita Gupta, President and CEO of the Leadership Conference on Civil and Human Rights and Dr. Ben Zipperer, economist at the Economic Policy Institute were among those testifying for the Raise the Wage Act in front of the House Education and Labor Committee. Read their written testimonies here.

On Thursday, Feb. 7, the House Energy and Commerce Subcommittee on Oversight and Investigations held a hearing on the Trump Administration’s inhumane family separation policy.

Christina Muniz de la Pena, a licensed clinical psychologist at the Center for Child Health and Resiliency and co-founder and director of mental health services at the Terra Firma Immigrant Youth Clinic, testified on behalf of the American Psychological Association. As a practicing psychologist, Muniz de la Pena recently worked with a three-year-old boy that demonstrated separation anxiety and hypervigilance after being separated from his parents for two months. Children who have been separated from their parents at the border are more likely to experience negative behavioral and emotional consequences that can last throughout their entire lives. Read Muniz de la Pena’s testimony here and APA’s article here.

These highlights are only a small fraction of the work that our member organizations do. We look forward to see what human needs advocates are able to accomplish during the 116th  Congress.